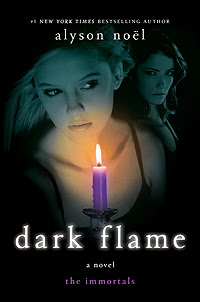 The Immortals Series - Book 4
First published in 2010
ISBN - 978-0-330-52061-4
Paperback
In this eagerly awaited continuation of the bestselling Immortals series, Ever struggles to help her best friend Haven transition into life as an immortal—trying to keep her from doing anything that puts them at risk, while attempting to gain control over her enemy Roman, so she can finally obtain the antidote that will allow her and Damen to be together. But when the spell she casts backfires, resulting in a strange, foreign pulse that binds her to Roman instead, Ever turns to Jude and dark magick, desperately attempting to break free of the curse, and ultimately risking everything she knows and loves—including her beloved Damen.

I read this book over the course of a day ... it's very easy to read. We follow the struggle that Ever faces trying to get the antidote from Roman, so that her and Damon can be together, and when she resorts to magic, she uncovers a demon that she didn't expect.

Knowingly or not, Alyson actually covers alot of the emotions that teenagers face - feeling bad about themself, not trusting those that love them, trying to handle things on their own and friendships being lost.The story flows perfectly - we have our central characters - and that is basically it. And that is all that the story really needs.

I liked the story ... feeling Ever's struggle, right up to the end of the book. Don't want to give anything away for those that haven't read it - but the story doesn't have the ending that I did expect ... so will be eagerly awaiting the next book NIGHT STAR to see what Ever & Damon face next time.