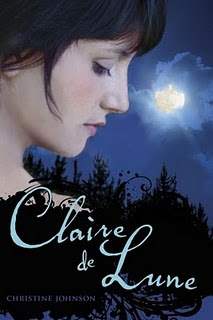 Hanover Falls hasn’t had a werewolf problem in over one hundred years. Seattle, Copenhagen, Osaka–they’ve had plenty of attacks. But when humans begin dying in Claire Benoit’s town, the panic spreads faster than a rumor at a pep rally. At Claire’s sixteenth birthday party, the gruesome killings are all anyone can talk about. But the big news in Claire’s mind is the fact that Matthew Engle–high-school soccer god and son of a world-renowned lycanthropy expert–notices her. And flirts with her. A lot.

That night, Claire learns that she is the latest in a long line of Benoit werewolves, and that contrary to popular belief, all werewolves are female. Killing humans is forbidden by the code of the pack, but a rogue werewolf has been breaking that law, threatening the existence of Claire’s new pack. As the pack struggles to find and fight the rogue werewolf and Claire struggles with her lupine identity, her heart and her loyalties are torn in two. Claire must keep her new life a secret from even her best friend–and especially from Matthew, whose father is leading the werewolf hunt…and with whom Claire is impossibly and undeniably falling head-over-paws in love.

I expected a lot from this book ... and for me, I don't think it delivered. You discover a relationship between mother and daughter, that is somewhat strained, which isn't helped by long absences. Claire has a live in housekeeper/nanny named Lisbeth, who is young, and the closest thing she has to a constant mother figure. A best friend, Emily, and a guy, Matthew, who is interested in Claire, but for the life of her, she doesn't see why. Throw in the changes that are happening to her body, and Claire is in for something ... she just doesn't know what.

The story didn't really grab me - sure there were pages where something interesting happened - but I didn't feel the beginnings of new love between Claire and Matthew, couldn't really see a great connection between Claire and Emily, definately not a lot of love between Claire and Marie (her mother) .. and had already worked out who the rogue werewolf was .. and picked up on a couple of other things that were going to happen in the book. If there is a follow up to this book, I would hope that there would be more time spent on the emotions between the characters, and try to keep the surprises coming - way too many hints in the storyline as you read.

Maybe it's an age thing - a teenager may gloss over some of the things I picked up on and enjoy the read ... but I think the older reader wouldn't.
RATING : 6/10
Posted by Denny at 6:26 AM
Labels: Book Review

I know what you mean about the age thing :)

i love young adult, but some books are only written for teenagers... :)

yeah - this one definately is ..