: The Stand by Stephen King : 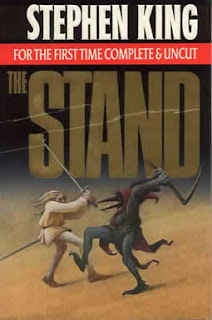 FROM MY BOOKSHELF
From time to time .. I'll post a review of something that has been read and is now sitting on my bookshelf - waiting to be read again!

One man escapes from a biological weapon facility after an accident, carrying with him the deadly virus known as Captain Tripps, a rapidly mutating flu that - in the ensuing weeks - wipes out most of the world's population. In the aftermath, survivors choose between following an elderly black woman to Boulder or the dark man, Randall Flagg, who has set up his command post in Las Vegas. The two factions prepare for a confrontation between the forces of good and evil.

I first read this book a long time ago ... I think when it was first published. For me, I couldn't put the book down .. it had me from the very beginning .. and made a confirmed Stephen King fan.

The writing is amazing ... there were times when I was reading this book that I actually felt the emotions, and had pictures in my head that were so real that I even felt sick. The struggle between good and bad, dark and light is covered so well in this book - it's scary actually to see how well people can be persuaded over to the dark side. Also, the hope that is experienced by people that they could survive and rebuild everything that was lost is a shining light to all of us to carry through each and every day.

Stephen King, you are an amazing storyteller ... you have a complete grasp on what you see in each book and totally absorb the reader with every word that is written from the front cover to the very last page of the book. This book is one of my all time favorites.