THE GLITTERING COURT by Richelle Mead 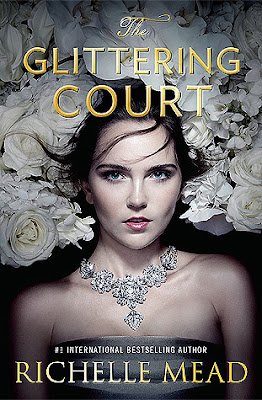 To escape an arranged marriage, Adelaide, an Osfridian countess, must pose as a servant and join the Glittering Court—a school designed to transform impoverished girls into upper-class ladies. Adelaide naturally excels in her training, and even makes a few friends: the fiery former laundress Tamsin and the beautiful Sirminican refugee Mira. She managers to keep her true identity hidden from all but one: the intriguing Cedric Thorn.

When Adelaide discovers that Cedric is hiding a dangerous secret of his own, together, they hatch a scheme to make the best of Adelaide's deception. Complications soon arise—first, as they cross the treacherous seas from Osfrid to Adoria, and later, when Adelaide catches the attention of a powerful governor.

But no complication will prove quite as daunting as the potent attraction simmering between Adelaide and Cedric. An attraction that, if acted on, would scandalize the Glittering Court and make them both outcasts in wild, vastly uncharted lands . . .

I'll be honest - I was really keen to read this book but it took a long time to grab my interest. I kept waiting for Adelaide to be discovered and returned to her home ... there was a lot of contradiction - Adelaide wants to escape from the plan of an arranged marriage, so she stows away with a group of women who are being sent to a school to be taught how to groom and prepare themselves for marriage to a stranger? Adelaide never really made any attempt to escape and make a new life for herself.

I found that the characters - well some of them - left me with questions and not answers.

Breaking ground in new lands was always going to bring hardships and stumbling blocks - to add to the love story between Adelaide and Cedric. There is always a bad guy waiting around the next corner to try and spoil the best laid plans.

I don't know what genre this book falls into ... Historical romance of Fantasy Romance ... maybe a little of both. In the end, I enjoyed the book and have the other 2 books in the series (which are stand alone books I think) but I will get around to reading them at some point.

To be honest ... at times this didn't feel like a Richelle Mead story at all.

Posted by Denny at 2:39 PM
Labels: Book Review, From My Bookshelf