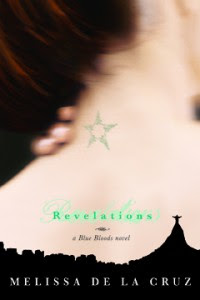 Have you ever wondered what secrets lurk behind the closed doors of New York City’s wealthiest families? They’re powerful, they’re famous… they’re undead.

Schuyler Van Alen’s blood legacy has just been called into question—is the young vampire in fact a Blue Blood, or is it the sinister Silver Blood that runs through her veins? As controversy swirls, Schuyler is left stranded in the Force household, trapped under the same roof as her cunning nemesis, Mimi Force, and her forbidden crush, Jack Force.

When an ancient place of power is breached by Silver Bloods in Rio de Janeiro, however, the Blue Bloods will need Schuyler on their side. The stakes are high; the battle is bloody; and through it all, Schuyler is torn between love and passion, duty and freedom. And in the end, one vampire’s secret identity will be exposed in a revelation that shocks everyone.

OMG - can you tell that I loved it! I have finished this book in record time for me ... lol
I love having the journey with Schuyler ... watching the relationship change with Oliver, and seeing the love affair with Jack grow, with Schuyler unsure if they can ever really be together.

Bliss had me worried during the book - there was something strange going on with her, and at the end of the book you find out what it is .... but only after tragedy strikes the Elders, and Lawrence. What will happen to them now? Part of me feels sorry for Mimi - to love Jack the way that she does and know that he loves another ... heartbreaking, but as you can gather ... Mimi won't go down without a fight. Jack is hers, and Schuyler won't find the path to true love easy.

I think that the way Melissa has written these books, young and old can enjoy them. The storyline flows, and you actually feel like you know each of the characters. I am moving on to the 4th book in the series The Van Alen Legacy now ... thanks for another great read Melissa.

Hey, I see that you are currently reading "Hush, Hush". Are you going to post a review about it? :D

Yeah I sure will ... have to do the review for the Van Halen Legacy first ... hehe