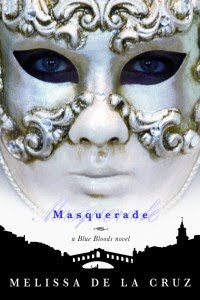 Schuyler Van Alen wants an explanation for the mysterious deaths of young Blue Bloods. Her search brings her to Venice, Italy, in the hopes of finding the one person who can help. Meanwhile, back in New York, preparations are feverishly underway for the famous Four Hundred Ball, an exclusive gala hosted by the city’s wealthy, powerful, and unhuman—a true Blue Blood affair. But it’s at the after-party masquerade that the true danger lurks. Hidden behind the masks is a revelation that will change the course of a young vampire’s destiny.

Rich with glamour, attitude, and vampire lore, this second installment in the Blue Bloods saga will leave readers thirsty for more.

With the 2nd installment in this series, I found that I became so engrossed in the story, that I literally read this book in an afternoon. Schuyler experiences so many emotions in this book - disappointment, sadness, elation, love.

Her relationship with Bliss blossoms, and they join forces trying to work out what really happened to Dylan? Was it all a cover up? Is Dylan really dead? Was Dylan really a Silver Blood?
And the cute new boy at school, Kingsley ... she knows that there is something about him that just doesn't sit right with her.

The reappearance of Lawrence, her grandfather, makes Schuyler happy - and once he begins to teach her all the talents she has yet to unlock, Schuyler finds herself becoming weaker with each knew challenge thrown at her. And knowing that she must take a familiar, something that she really isn't keen on doing. She wants it to be someone that she knows, and is familiar with and when she asks Oliver to allow her to feed on him, she knows their relationship will change, but will it be for the better. By feeding on Oliver, she is going against the rules - he is her Conduit, and has been by her side forever - she will see all his memories and feelings. Is she ready for that?

And Jack - what a position to be put in. An immortal bond exists between Mimi and Jack, but he just can't stay away from Schuyler. In the end, Schuyler is the one that can make or break the bond between the two of them ... at what expense?

Right to the end of the book, I kept expecting a miracle - one day Schuyler will go to the hospital and her mother will wake up ... won't she?

Melissa keeps the reader hooked all the way through this book (gently bows) and has left the ending once again having me totally intrigued and already grabbing for Revelations.