LOVE WITHOUT BLOOD by Raz Steel 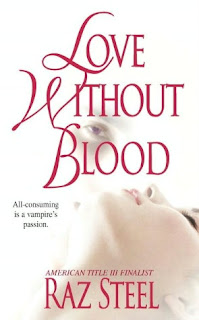 "I CAN'T STOP THE BLEEDING," said her nighttime caller.
The intruder then compelled Dr. Lara West to remove the bullet from his shoulder. She treated his wound, but that quelled neither his desire for the sweet life pulsing through the flesh of her thigh, nor the rampant animal lust that defines his existence.
The darkness has just begun. Dr. West's identity, what she wants--all stands in danger of being devoured. Nothing is ever the same for those inducted into the sinister world of vampires, be they newly turned monsters or the government agents sworn to destroy them. Lara West has tasted both power and passion, and a price must be paid. Yet she's glimpsed salvation in the night. Hope still remains for... LOVE WITHOUT BLOOD

The story has you alternating between the stories of Lara and the male nurse/vampire Bobby. They intermingle along the way, until they are thrown together and the story becomes one. You will find this is no teenage vampire story - Bobby the vampire has the ability to read women's minds, searching for their fantasies - and at times, this can be a little raunchy.

Government agencies trying to capture a rogue vampires, Lara unable to even comprehend the fact that vampires do exist ... and the strong connection between Lara and Bobby - this all wraps itself together to create a very enjoyable and pleasureable read.

You will get closure with this story - unusual these days, considering most authors are following the Book 1,2,3 and so on genre ...

The downside of this book, which seemed slightly unbelievable, was the elderly parents of Phillipe another nurse, in the book. As I was reading their part in the book, I remember thinking WHAT? They can't accept that their son is gay, but they have acceptance of the existence of Vampires?
Oh well .. that was just the way I felt reading it.

This is a good read - you will find yourself engrossed and the pages will be flipping over until you reach the end, and still want more.