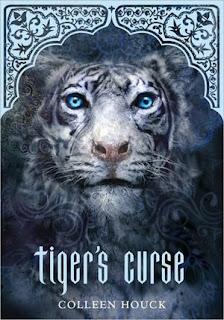 The last thing Kelsey Hayes thought she'd be doing this summer was trying to break a 300-year old Indian curse. With a mysterious white tiger named Ren. Halfway around the world. But that's exactly what happened.

Face-to-face with dark forces, spellbinding magic, and mystical worlds where nothing is what it seems, Kelsey risks everything to piece together an ancient prophecy that could break the curse forever.
- - - - - - - - - - - - - - - - - - -
I bought this book for my niece and she passed it on to me to read. Her opinion was that as she was reading it she wasn't that fussed about it, but once she got into it, she loved it so much, she went out and bought the next one straight away. So there you have it, I just had to read this book.
I enjoyed the story - and for a change, there was no vampires/werewolves/fairies - so I started. I picked up straight away that there was more to Ren than we knew and it all began to fall into place very early on in the book for me. (Yes, I know this book is aimed at teenagers)
I love the travel to India, I loved all the information given in the story about the culture and the curses and gods of India - but for me the story fell a little flat. We have the awareness of the love between the Kelsey and Ren, and the resistance of Kelsey to commit to Ren as she doesn't want to feel like his cage(?). Sorry, but I instantly thought of all the 17yo girls I know and think they would have ALL jumped head first if they were in love with someone as gorgeous, kind, loving and sweet as Ren appears to be in the book.
I know there are more books in the series, but I don't know that I will read them. I enjoyed the story that was written but maybe it's just not for me.