DIVINE BY MISTAKE by P.C. Cast 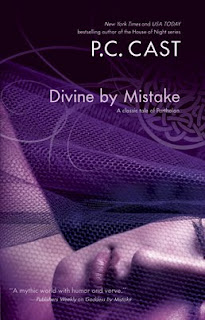 First Published in in 2009 (GB) by MIRA Books
Paperback : 571 pages
ISBN : 978 0 7783 0357 2
The only excitement Shannon Parker expects while on summer vacation is a little shopping. But when an antique vase calls to her, she finds herself transported to Partholon, where she’s treated like a goddess. A very temperamental goddess…

Somehow Shannon has stepped into another’s role as the Goddess Incarnate of Epona. And while there’s an upside – what woman doesn’t like lots of pampering? – it also comes with a ritual marriage to a centaur and threats against her new people. Oh, and everyone disliking her because they think she’s her double.

Somehow Shannon needs to figure out how to get back to Oklahoma without being killed, married to a horse or losing her mind…
When I first opened this book, this is what I read on the inside ... something that PC Cast had written to the readers. "I told myself I was going to write The Book I'd Most Want to Read, and that's exactly what I did". I have to say, I thought okay - this is going to be good. I hope it's the book I most want to read to!
The first chapter of the book had me thinking, um hurry up move along, and then it did. With a bang. Changes to everything Shannon had ever known - a whole new world in a whole new time, where she is treated like a princess. And everywhere she looks, all the people close to her mirror people from her life in the 'other world'.
Shannon finds herself very slowly beginning to care about the people around her, and when she is confronted with having to deal with the evil that she visits and sees when the Magic Sleep takes over, she knows that she is bound to this place more than she could ever realise. She is the Chosen One, not Rhiannon who switched places with her.
Read this book- and find yourself transported to a gentler time ... and fall in love with the fantasy that will surround you - especially in your dreams.
RATING : 8/10
Posted by Denny at 1:00 PM
Labels: Book Review