LORD OF LEGENDS by Susan Krinard 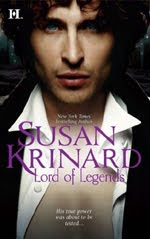 First published in 2009
Paperback : 348 Pages
ISBN : 978-1-921-68503-3
He is Arion, King of the Unicorns. Powerful, seductive, he could possess any female he desired - until now. He is condemned to live as a man, and it is only the enchanting Lady Mariah Donnington's innocence that can release him from his curse.
Abandoned on her wedding night, frightened of her hidden, otherworldly heritage, Mariah is instinctively drawn to the mysterious stranger she discovers imprisoned on her husband's estate. But as the secret of Arion's magical identity unfolds, their friendship burns into a passion that cannot, must not be consummated. For to do so would destroy them both ...
--------------------------------------------------
I haven't read the previous books in this series, and I think that maybe I should have. I did enjoy the story, and could believe the situation that Mariah found herself in - being in a house with her vindictive, nasty mother-in-law, who was always out to find a way that she could get rid of her, and being befriended by women who only wanted her out of the way ... but as for the rest of the story, well, I did find it a little ordinary. At times, I felt like the story really wasn't going anywhere. When things did start to happen, it was all at once, like desperately trying to close the book off.
Read it if you will ...
RATING - 5/10
Posted by Denny at 2:47 PM
Labels: Book Review