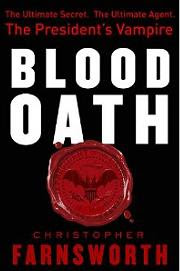 ONLY ONE MAN CAN SAVE US… AND HE’S ALREADY DEAD.

Zach Barrows is an ambitious young White House staffer whose career takes an unexpected turn when he’s partnered with Nathaniel Cade, a secret agent sworn to protect the president. But Cade is no ordinary civil servant. Bound by a special blood oath, Cade has spent more than 140 years in service to the president, battling nightmares before they can break into the daylight world of the American dream.

Immediately Zach and Cade receive their first joint assignment: one that uncovers a shadowy government conspiracy and a plot to attack the Unites States with a gruesome new biological weapon. Zach soon learns that the world is far stranger, and far more dangerous, than he ever imagined . . . and that his partner is the least of his problems..

This book started off more like a spy thriller than a normal Vampire Book that we've read in the past .. and I was pleasantly surprised at how quickly it grabbed me. The story flowed quite well - as each character was introduced, you were given time to get to know them and have them settle into the story easily. There is a mixture of science fiction, fantasy and mystery mixed in with the supernatural.

This book was great reading - the movement of the old partner to the new - Zach. who actually can't believe that he is now spending every day side by side with a vampire. A real vampire. And when they receive their first assignment, Zach had no idea of what they are walking into and the changes that will happen to him. Because really, he is a snivelling little boy until he is made to grow up and face some realities about the world around him.

Naturally we have the good and bad sides in this book - wouldn't be much of a story if we didn't - and it's interesting watching the way they are dealt with.

This is the first book for Christopher, with the 2nd book in the Series - the President's Vampire to be released in April 2011. I highly recommend this book to anyone looking to move away from YA Vampire style of books.