DIVINE BY BLOOD by P.C.Cast 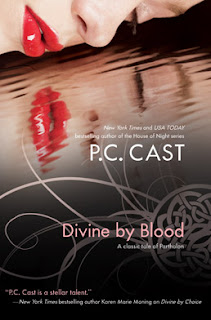 First Published in Great Britain in 2010
by MIRA Books
Paperback - 392 pages
ISBN - 978 0 7783 0363 3
"You are divine by blood and have power beyond your wildest imaginings"
Morgan bit her lip. Power beyond her wildest imaginings - WOW! That must be some power, because she definately had an excellent imagination.
Conceived in a lie to a goddess plagued by evil and a father that sacrificed himself to stop her. Morrigan is raised as a normal girl in Oklahoma.
Now eighteen, Morrigan is finally learning the truth about her past and discovering an ability to harness magic. Finding her way to Partholon, she hopes to be respected as the daughter of a goddess - she's ready to be worshipped!
But Morrigan is plagued by doubt - are the voices she hears a connection with the goddess of Epona, or the evil that controlled her mother.
* * * * * * * * *
This book took me a little bit to get into ... I wasn't a fan of Morrigan, she seemed like deep down she had the makings of another Rhiannon, which annoyed the heck out of me.
It was like going back to the beginning again, once Morrigan crosses over into Partholon, and she has to be looked after by Brita, who was the High Priestess before she appeared to them. But slowly, I tended to have a softness for Morrigan - how could she not have some of Rhiannon's dark side running through her, considering the circumstances before and during her birth.
The story grew on me, and I came to understand where she was coming from - fighting the ultimate battle - good vs evil. The way the book ends, is just right for the 2 follow up books in the series ELPHAME'S CHOICE and BRIGHID'S QUEST.
Take the chance ... grab these series of books and lose yourself in a mystical fantasy story of love and discover.
RATING - 7/10
Posted by Denny at 2:41 PM
Labels: Book Review