: Dead until Dark by Charlaine Harris : 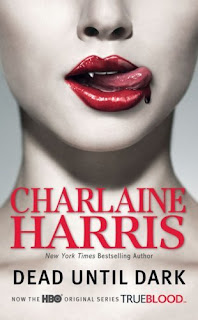 Sookie Stackhouse is a small time cocktail waitress in small town Louisiana. She's quiet, keeps to herself, and doesn't get out much. Not because she's not pretty. She is. It's just that, well, Sookie has this sort of disability. She can read minds. And that doesn't make her too dateable. And then along comes Bill : he's tall, dark and handsome - and Sookie can't 'hear' a word he's thinking. He's exactly the type of guy she's been waiting for all her life.

But Bill has a disability of his own : he's a vampire. Worse than that, he hangs with a seriously creepy crowd, with a reputation for trouble - of the murderous kind.

And when one of Sookie's colleagues is killed, she begins to fear she'll be next ....

Right, where do I start? I have had this series of books sitting on my shelf for ages ... and I have only read this book so far, and that was months ago. You might be wondering why ... maybe it's that I watched TRUE BLOOD the series first, and when I picked up this book, I will admit I was just a bit disappointed.

As I was reading this book, I was thinking to myself that the writing seemed very simplistic ... I'm not sure what I was expecting. I found myself getting a little bored and hoped that there was going to be more in the book that hadn't been incorporated in the TV series. But there wasn't ... so I don't know what to tell you apart from I have now picked up LIVING DEAD IN DALLAS ... and plan on reading it now. I feel like I am the only one that doesn't love this series of books so far.

RATING 6/10
Posted by Denny at 3:04 PM
Labels: Book Review, From My Bookshelf

I guess my review is pretty much the same. I too kept wishing for something... more to happen, but it seems like the show is an improvement on the book. And that's rare.

YAY .. someone else does agree with me. I am going to plod on through the books, but like you, the show is so much better ...I agree with you, it is rare for the show to be better than the book

I really enjoyed the HBO series-actually thought it was Ryan Kwantan's best acting. Sad that the books don't seem to come close.

I agree Sean ... the series is great ... I am hoping that the books keep getting better. Everyone I know that has read them has loved them ...
Ryan's work in Home and Away (I am an aussie) wasn't that brilliant ... lol ... but it sure has improved alot

Well yes the only way is up from Home and Away