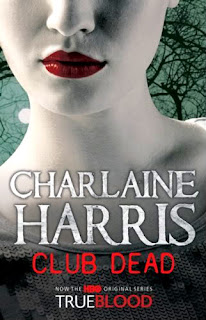 First Published in Great Britain in 2004
by Little, Brown
This edition published in 2009 byGollancz
Pages - 274 Paperback

Sookie Stackhouse always found it difficult to date - she's cute, but not many guys are comfortable with her mind-reading abilities. But vampires have no problems with Sookie's talent - she can't pick up much of anything from the undead.

But there's only one vampire Sookie Stackhouse is involved with - at least voluntarily - right now, and that's Bill. But recently he's been a little distant - in another state distant. His sinister and sexy boss Eric has no idead where to find him, and next thing Sookie knows, she's off to Jackson, Mississippi, to mingle with the underworld at Club Dead. It's a dangerous little haunt where the elusive vampire society can go to chill out and suck down some Type O - but when Sookie finally finds Bill, he's not only in trouble, but caught in an act of serious betrayal. Should she save him, or sharpen some stakes?

I enjoyed this book - the interraction between Sookie and Eric, and also Sookie and Alcide - she really has found herself in a little quartet hasn't she? The situations that Sookie finds herself in when she gets to Jackson, dealing with werewolves and Lorena, along with trying to find Bill and fighting the attraction with Eric - makes this chapter in the series of books really interesting.

Looking forward to the next book ...