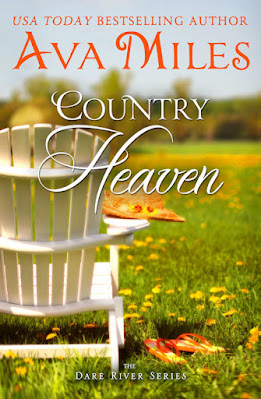 When famous - and infamous - country singer Rye Crenshaw saunters into the diner where she cooks, Tory Simmons is certain she's got him pegged. He's a bad boy who indulges himself in all things, women included. But while she couldn't care less about country music or arrogant men, Rye makes her an offer she can't refuse when he asks her to be his private chef on his multi-city concert tour. The job is the answer to all her prayers: It will clear out her debt and finance the fresh start she desperately needs.

Rye is certain his sassy new cook is the last woman who'd ever tempt him, but spending time with the wholesome girl next door will do wonders for his damaged public image, whether she likes being forced into the spotlight or not. Her food also happens to be the best he's ever eaten, both comforting and seductive. But spending time with Tory on the road shows him a new side to her - one that's as impossible to resist as her food. And when an emergency in his family whisks him home, he does the one thing he's never risked: he lets a woman into his heart....

Soon the emotions Rye faked for the tabloids become all too real, but will the country heaven he's found in Tory's arms survive in the real world?

I have to admit .. I loved this book ... I totally lost myself in the romance of boy meets girl scenario ... you know what I mean. The story flowed really well ... there was no "downtime" with this book ... it never once made me want to skip a page.

Descriptions were covered quite well ... not too much and not too little ... I definately could form pictures in my mind of how the houses looked etc. And the characters ... oh they were covered with a depth and clarity of their style and behaviours that rang true.

Tory - she could be any one of us - trying to make our way after losing family, being alone, and struggling emotionally & financially - and then Rye walks into her life offering her a chance to work for him, on the road while he tours across the country.

Rye Crenshaw is a success story .... his music creates adoration among fans and he makes himself available to as much female attention as he can, basically to help him forget his past, and make it through day after day ... convincing himself that he is happy with his life. The story explains why Rye leaves and has nothing to do with them .... until his father takes sick and his little sister calls him home.

All in all, I think the story covered the family issues, the emotional issues, the love issues, and came out a winner. And did I say earlier that this is the first book in The Dare river Series? I will have to get the rest of the series ... shame on me for not having them already.

Little side note - at the start of each chapter this is either a recipe(Tory) or the words of a song(Rye) ... I really did like that - some of those recipes and side stories that belonged with them sound awesome

Would you like to read this book for free?  Click this link to get it free on Kindle and Audible HERE