DARK OF THE MOON by Rachel Hawthorne 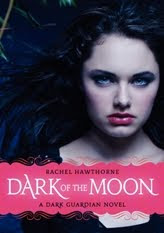 First published in 2009 by Harper Collins
Paperback : 262 pages
ISBN : 978 0 06 170957 - 9
Brittany is determined to prove herself to the Dark Guardians. And yet, she's been keeping a devastating secret : She hasn't experienced any of the intense, early signs of change that mark a Dark Guardian's transformation. The only intense feelings that she has are for Connor - and she's kept that a secret too. But she knows she'll never truly have Connor's love if she's not a shifter like him.
At the first full moon after her birthday, her greatest fear is realized : She doesn't transform. Brittany is so desperate to become a wolf that she'll go to extremes she never thought possible ... and put all the Dark Guardians in incredible danger.
* * * * * * * * * * * * * * *
Another easy book to read in this series - read it quite quickly, and even though I did, I enjoyed it, but it's light reading. We follow Brittany through trying to keep her secret from everyone, except her friend that she confides in. Together, they are wondering if maybe Brittany's birth certificate is wrong, and she may just have to wait a bit longer. That said, she has to keep her guard up to make sure her secret stays just that, just a little longer.
And once Connor starts to pay her attention, she fears telling him the secret that could effectively end their chance at a relationship. Throw in the 'mad' scientist Mason who is after them, at all costs, to try and make a serum from their blood and be able to transform - no matter what, that is his ultimate goal.
Enjoyable read - with a predictable ending.
Next book in the series is SHADOW OF THE MOON
RATING - 6/10
Posted by Denny at 3:20 PM
Labels: Book Review

I only read Moonlight in this series, but thought it wasn't very good. Pretty predictable, so I decided to not read further. :) Glad you enjoy the series.

Don't you think those covers are wonderful?!

yes they are ... and I did manage to finish the series ... definately aimed at the younger market ...