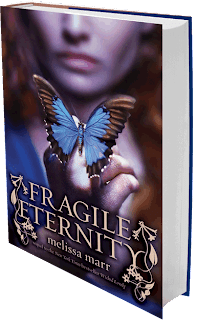 Seth never expected he would want to settle down with anyone—but that was before Aislinn. She is everything he'd ever dreamed of, and he wants to be with her forever. Forever takes on new meaning, though, when your girlfriend is an immortal faery queen.

Aislinn never expected to rule the very creatures who'd always terrified her—but that was before Keenan. He stole her mortality to make her a monarch, and now she faces challenges and enticements beyond any she'd ever imagined.

In Melissa Marr's third mesmerizing tale of Faerie, Seth and Aislinn struggle to stay true to themselves and each other in a milieu of shadowy rules and shifting allegiances, where old friends become new enemies and one wrong move could plunge the Earth into chaos.

I enjoyed this book ... the devotion of Seth, to do anything to spend eternity with the love of his life Aislinn, who is the Summer Faery Queen. And to watch Keenan watch her suffer, knowing where Seth is, in the hope that she will fall for him and forget about Seth, and make their union an untouchable force in the Faery Kingdom .... well, it happens in real life doesn't it?

I loved the story between Seth and the Faery Queen ... how she takes him under her wing and looks on him as the son she never had.

The downside, well I felt that the story had drifted from the other 2 books ... and was a little disappointed in that aspect of it.