:The Dark Divine by Bree Despain: 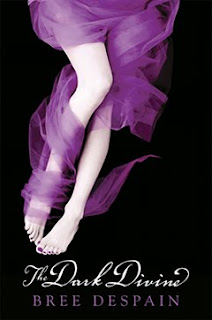 First published by Egmont USA in 2010

- - - - - - - - - - - - - - - - -
I had no idea what this book was about when I bought it - which is a refreshing change. So as I started to read, I began to form a picture in my head of each of the characters. Nothing unusual there. The story moves along ... we have a good girl, from a good family, with a hot guy after her, what more could you ask for.
Enter Daniel ... and you know from the moment he says hello to Grace, you know that the nice smooth life she has is going to change.

As I continued to read, I remember thinking that I had it all sorted - I knew exactly how the book was going to end ... WHAMMO I was wrong ... maybe the signs were there, but I became too involved with Grace & Daniel, so I would have missed them. There was a nice twist to this book ... so you won't be disappointed when you read it.

I love the way that Bree wrote this story ... her descriptions at times had me reading faster as things started to happen, and then I could sit back and read leisurely when things quietened down.

this one sounds really interesting. i love when books are surprising and go off in a different direction.

I'll have to be on the look out for it.

Hope you're having a great weekend!