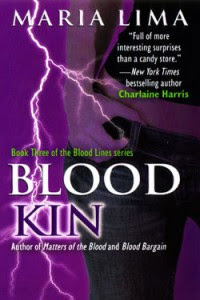 The perils of power…

Keira Kelly has come into her full powers, and they are frighteningly strong, creating a distance between her and her human friends in her beloved Rio Seco. It is time to obey her great-grandmother Gigi’s orders, and rejoin her family in northwest Canada, where Keira can learn to handle her dangerous new skills. She’ll have friends with her every step of the way—her shapeshifter brother Tucker, his beloved Niko, and, to Keira’s dismay, her cousin on her mother’s side, Daffyd ap Geraint, the Sidhe prince who suddenly appeared in her life and now refuses to leave—but her vampire lover Adam has insisted on staying in Texas. And while there are certainly perks to being Family, such as a private Lear jet for the flight to Canada, and a fabulous penthouse condo overlooking Vancouver, there are threats looming that nobody, not even Gigi, has anticipated. Keira’s Sidhe inheritance from her mother is far more important than anyone ever realized, and the fate of the Clan may depend upon what she does….

Keira and Adam are still together, as is Nicko and Tucker. Things seem to be going well, and then Keira begins to feel the full force of the change, which has her summoned to Canada. Naturally as you can guess, things don't go according to plan and they find themselves trying to solve the mysterious murders of some homeless men, knowing that it has something to do with Keira, or at least the Kelly clan.
I am really happy to say that Maria kept this story going with even more twists and turns that had me itching to see what happened next. I for one felt like everything written about the Fae, Shapeshifters, Vampires etc rang true and felt that Maria gave perfect descriptions of places, people and events. The books flows so well - the story is never boring. If you can even begin to guess what happens to them, then you should be writing books ... lol
The final instalment in this book BLOOD HEAT comes out on October 29th 2010 and I can't wait.

October is closing in but too far away still. I read on her home page that she is now writing book 5?, does not come up anywhere else though and long ago in an interview she had said there may be up to 6 books in the series....

Anyway up to now book 3 is my favorite because it resolved quite a bit of the mystery of Keira's heritage and yet at the same time left it open ended for book 4.

I am glad you are keeping up with The Gates show also, personally have forgotten and watched on my computer last Sunday's episode and think probably will do the same this next show. Shorter commercials and I miss my Damon fix!!!! {VD is so much better}

SO up to 6 books in the series - that sounds interesting ... will be hoping for October to come quick so I can get the next book.
Thanks Jackie ...

I read the comment by Maria Lima in a contest interview way back in 2009 and that is what she said there "may be" up to 6 books but cannot find that substantiated anywhere...


Team Stefan, okay but how can you possibly resist the devil in disguise with those beautiful bedroom eyes in Damon!! LOL

I just like the bad boys better, cannot help it!
jackie b central texas