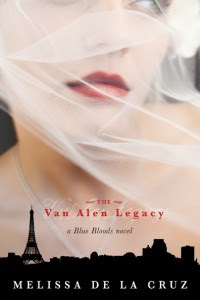 With the stunning revelation surrounding Bliss’s true identity comes the growing threat of the sinister Silver Bloods. Once left to live the glamorous life in New York City, the Blue Bloods now find themselves in an epic battle for survival. Not to worry; love is still in the air for the young vampires of the Upper East Side. Or is it? Schuyler has made her choice. She has forsaken Jack for Oliver, choosing human over vampire. But old loves die hard...And even coldhearted Mimi seems to suffer from the ties that bind.

This book really did a great job of covering all the major characters in the series. We find ourselves a year down the track - Mimi and Jack didn't go through with the bonding ceremony, and Mimi has volunteered to help Kingsley search for Sophia (Jordan). As angry as she became at Jack for his feelings towards Schuyler, Mimi now finds herself having the very same feelings for Kingsley, but knows that she cannot break the sacred bond.

Schuyler and Oliver have been in hiding for way too long, and Oliver talks Schuyler to return to New York, and he promises to deal with the Conclave. He is dedicated to Schuyler and loves her dearly.

Poor Bliss - alot of answered questions for me ... I did wonder why she became such a big part of the story in the last book, and she features quite strongly in this one too but when reading it, you understand why. The Visitor makes Bliss work for a clear thinking moment all the way through this book.

The Silver Bloods haven't won - but will they? We will have to wait and see when Misguided Angels is released in October.