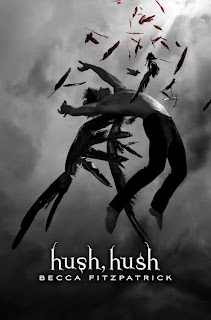 For Nora Grey, romance was not part of the plan. She's never been particularly attracted to the boys at her school, no matter how much her best friend, Vee, pushes them at her...until Patch comes along.
With his easy smile and eyes that seem to see inside her, Nora is drawn to him against her better judgment, but after a series of terrifying encounters, Nora's not sure whom to trust. Patch seems to be everywhere she is, and to know more about her than her closest friends. She can't decide whether she should fall into his arms or run and hide. And when she tries to seek some answers, she finds herself near a truth that is far more unsettling than anything Patch makes her feel.
For Nora is right in the middle of an ancient battle between the immortal and those that have fallen - and when it comes to choosing sides, the wrong choice will cost her life.

I had been so keen to read this book ... and being the next book on the pile, I grabbed it and settled down, waiting to be captivated by the story.

For me ... this book was a let down ... I had worked out who the bad guy was way before he was revealed, knew that Patch was in love with Nora, and that Vee was shallow and self absorbed.

I can't honestly say that I would recommend this book to anyone ...

Oh shoot! I was very excited about this book too because I saw the cover and the plot with different occasions. Action is what I mostly like in a book. Could I ask you if you have suggestions for books that involve angels?

The cover really draws you in and you think it's going to deliver alot more than it does.

I haven't read alot of books involving angels ... but here are some you could try
The Mortal Instruments Series by Cassandra Clare, "Skellig" by David Almond or "Touched by Angels" by Debbie Macomber