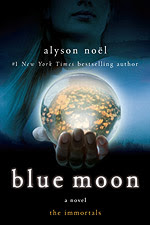 Ever has a chance to bring her family back from the dead—but only if she's willing to sacrifice the guy she loves more than life itself.

Just as Ever is learning everything she can about her new abilities as an immortal, initiated into the dark, seductive world by her beloved Damen, something terrible is happening to him. As Ever's powers are increasing, Damen's are fading—stricken by a mysterious illness that threatens his memory, his identity, his life.

Desperate to save him, Ever travels to the mystical dimension of Summerland, uncovering not only the secrets of Damen's past—the brutal, tortured history he hoped to keep hidden—but also an ancient text revealing the workings of time. With the approaching blue moon heralding her only window for travel, Ever is forced to decide between turning back the clock and saving her family from the accident that claimed them—or staying in the present and saving Damen, who grows weaker each day...

I liked this book - seeing Ever come out of her sullen ways and finding a love with Damen. Then to see her anguish as Damen begins to grow distant, and then the ultimate betrayal ... hooking up with Stacia. Ever knows that deep down inside the old Damen is still there, and that Roman, the new guy in school isn't what everyone thinks - she gets a cold sickly feeling in her stomach everytime he is around.

And when Haven & Miles begin to hang around with the cool kids at school, Ever is convinced that there is some sort of magic controlling all of them. Enlisting the help of Ava (psychic) Ever travels back to Summerland (wouldn't it be nice to go there!) and searches for the clues to help her save Damen.

I didn't see the twist coming at the end of the book with a so called "ally" but knew all along that Roman was behind everything. Good story line ... and now it's onto Shadow Land - book 3

This is a great book for teens and adults alike

Posted by Denny at 9:28 AM
Labels: Book Review